Centrist solutions exist to many of California’s and our nation’s problems.

Politics makes it easier to attack an opponent’s position than to advance one’s own, however. Nuance dies in the toxic environment of social media- based politics. If you’re explaining, you’re losing; and simply to rebut the demonized version of your own position qualifies as losing. Far simpler is to demonize right back.

Both major parties have given up being concerned about the federal deficit. If they ever return to considering how to bring our national budget into balance, the left proposes making corporations and wealthy “pay their fair share.” The right proposes stimulating economic growth so that tax revenues grow on the natural, while refusing any expansion of entitlements.

Proposing an increase in the cap on income subject to the payroll tax will condemn a Republican to a primary challenge. Proposing a postponement of the age at which one becomes eligible for Social Security or Medicare goes in precisely the opposite direction to the “Medicare for all” vector of Democratic Party activists.

Combining the two concepts guarantees withering attack from both directions, though it might be the only way to address entitlements: the least controllable element of federal spending.

Abortion is another example.

There are no pro-choice Republicans left in the House of Representatives. There are virtually no pro-life Democrats there either (one of the last, Congressman Dan Lipinski, was defeated in the Illinois Democratic primary this year). The Supreme Court has worked out a compromise: the state can’t refuse a woman the right to make the decision up to a point early in her pregnancy, but it can thereafter. A politician, however, must choose one of two positions: the woman has the right to control her body, or the child in the womb is a life entitled to protection.

In California, charter schools present another example. A Democrat who favors equalizing the funding between charter and other public schools can expect a primary challenge. For Republicans, an increase in supervision of charter schools must be resisted as an encroachment on parents’ rights. A middle ground would empower more oversight of poorer performing schools but greater freedom for those with better results. Yet that compromise is unachievable when the very concept of a charter school (since it is not automatically subject to a union contract) is an existential threat to the state teachers’ union, which dictates education policy to the Democratic caucus in Sacramento.

Conversely, any Republican voting to extend greater school board control is viewed as undoing exactly what makes charter schools effective and would not survive a conservative challenge.

To address greenhouse gases, the left orthodoxy is to cap emissions. The right orthodoxy is to cast doubt on whether human activity is a principal cause. Most economists realize a carbon tax is preferable to an arbitrary cap, but Democrats can’t vote for a tax lest they be demonized as tax-and-spend liberals. For orthodox Republicans, even cap-and-trade went too far: Assemblyman Chad Mayes was overthrown as Republican leader for this apostasy and is now the lone independent in the California Legislature.

Can we empower the embrace of sensible centrist solutions? We’ve done it before.

In 1983, President Reagan and Speaker O’Neill created a bipartisan panel to save Social Security. At the end of the Cold War, Presidents Bush and Clinton created commissions to decide which U.S. military bases were no longer needed. The common element of these two successful processes was that the decisions were made by individuals who were not running for office. Congress had to approve the package each commission eventually recommended, but the entire package was put to a yes/no vote.

No amendments were permitted. In that way, sensible compromises were enacted, without any elected official being vulnerable to extremist characterizations.

Similar approaches would work in California for many intractable issues, but it will take both independence, and independents, in the Legislature to advance them.

Tom Campbell is a professor of law and of economics at Chapman University. He served five terms in Congress and two years in the California state Senate. He left the Republican Party in 2016 and is in the process of forming a new political party in California, the Common Sense Party. 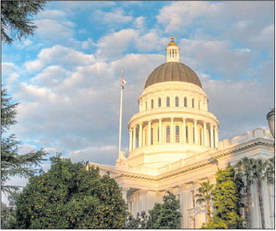 Working with the other party in Sacramento’s Capitol today is likely to get you bounced from your legislative seat.

Click here to see this page in the eEdition: